Grabbed the Parentals and Sister for this weeks cinema fix! Love family fun time. We headed to a film that will please all ages and genders. The Martian is Ridley Scotts latest offering and I am happy to say it doesn’t disappoint.

with thanks to entertainment weekly

Now I have been a bit wary of Space films since the painful Interstellar (let me count the ways i hated this….) But this has Matttttt DDDaaammmooonnnnnn. Yeah i love Matt, when I found out he has signed on for another Bourne it was like finding a New Harry Potter book… That excited! Heaven 🙂

So the Martian tells the story of astronaut Mark Watley who is left behind, presumed dead, after a mission to Mars. We follow his story as he struggles against this hostile planet, to survive on limited supplies with just his smarts and spuds. He has to figure out how to stay alive, to make contact with Earth and somehow maybe get saved.. Simples! 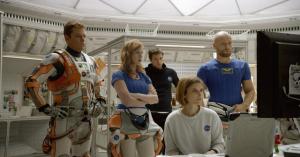 If you liked the painful-never-ending-dragged-out-slow-motion-soulful-music-laden-time-has-stopped-I-want-to-die-moments of Interstellar you will be disappointed! The Martian is so much better. Here you have humour, emotion, action and really beautiful cinematography.

I really got sucked into the movie. There was a few times I emerged embarrassed from behind my hands after a stressful scene only to laugh that I wasn’t alone in it. To the left my sister pulling the same face. Suckers!

It is so great to see Scott and Damon back on form. This is a great nerdy film. It hangs the nerd/geek banner proud. Nerds are cool now don’t you know?!? Though I don’t think they are all as hot as the scientist in this film…If they are I am wishing I was in NASA!

Quality cast in this..Everyone is great I can’t fault anyone. Obviously Damon is the star but Ejiofor coming in a close second. Adds some heart to the NASA team.

Review: This is no Interstellar- Thank God! I loved this film. I enjoyed every second of it. It is so happy in its nerdiness.. it explains every science part but not too much and it made me want to go watch more space geek stuff! good for all ages and genders so grab a group,, get the popcorn and enjoy 🙂

Did you see this? What did you think?

Leave a Comment, I would love to hear from you :) you can comment through FB/Twitter tab on this also Cancel reply